Texarkana is The Nicest Place in Arkansas and Texas: Reader’s Digest 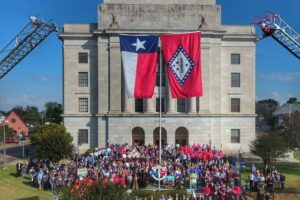 The Nicest Place in Arkansas and Texas: Texarkana

In most places, a dividing line acts to separate people. In this border town, the line brings folks together.

Texarkana is one city that happens to straddle two states, so it has plenty of built-in divisions.

As its name suggests, the Texas-Arkansas border runs right through town of nearly 70,000. And as you might expect in this part of the country, a high-school football rivalry between the Texas High Tigers and Arkansas High Razorbacks goes back more than 100 years. The annual game draws 10,000 fans.

Of course, few disputes can’t be solved by breaking bread, and another annual tradition in Texarkana, USA—as locals refer to it—is the Dine on the Line dinner.

Tables are set up down the middle of State Line Avenue (the state border runs right down the double-yellow traffic lines) and more than 1,000 people come to eat, talk, and have the unique experience of passing the salt across state lines. Diners are invited to sit on either side of the table, and mayors from both towns make a speech.

Sounds good when a politician says it, but goals aren’t always aligned. A recent water-system dispute (the cities share the system but have different laws governing it) divided leaders in town, according to Les Minor, editor of the Texarkana Gazette. Eventually, differences were settled, and then it was time to make up—over a handshake on State Line Avenue.

These days the city is coming closer together all the time. Bruggeman (Texas High, class of 1980) recalls the days when the week of the big game would mean pranks all across town.

“That’s really toned down over the years,” he says. After all, locals want to live up to the longtime city motto, written in huge letters on a water tower right by I-30: “Twice as Nice.”

Texarkana is a unique place that is located on the border of Texas and Arkansas. Between both cities we have two mayors, two city councils, two police and fire departments, however we are one community in our sense of pride.

The cities share a single Federal building, one of the most photographed in the country because of its unique location.

It is not uncommon to see stories in the local newspaper and on social media about citizens going the extra mile to be nice to others. Recently, a citizen was recognized at a City Council meeting for a random act of kindness for helping a elderly lady cross the road. The act of kindness caught so much attention on social media the Mayor noticed and invited the gentleman to the Council meeting to honor him with a city lapel pin and to share his story. This is only one example of many especially with the Random Acts of Kindness movement in town.

Dine on the Line is an event in town that demonstrates kindness and getting to know your neighbors in support of downtown revitalization. This one day event brings residents from both sides together for food, fun and fellowship along a 1,200 foot table that straddles State Line Ave. You can sit on either side of the table (Texas or Arkansas) to share dinner conversations with others and the Mayors ceremoniously toast the evening each year.